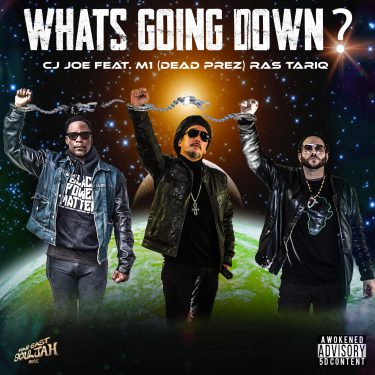 WHILE PEOPLE ALL AROUND THE GLOBE ARE SUFFERING MORE THAN EVER BECAUSE OF OUR FREEDOMS TAKEN AWAY, INTERNATIONAL JAPANESE REGGAE ARTIST CJ JOE BRINGS HIS NEW SONG TO THE WORLD TO EMPOWER PEOPLE GLOBALLY ON THE SONG CALLED “WHAT’S GOING DOWN?” SUPPORTED BY LYRICAL FIRE COMING FROM NONE OTHER THAN LEGENDARY MC , ACTIVIST & AUTHOR “M1” OF DEAD PREZ FROM BROOKLYN, NEW YORK AND MC AND DJ “RAS TARIQ” OF JAH MISSION OUT OF AMSTERDAM.

MC, DJ, activist, filmmaker, producer, and reggae music enthusiast alike, Ras Tariq hails out of Amsterdam, The Netherlands. He has spent many years playing his music in far-flung corners of the world, in places as diverse as Jamaica, Senegal and the USA, to name but a few.
He has played in some of the major night clubs and has performed on shows and festivals with artists such as Lee Scratch Perry & Mad Professor, Johnny Osbourne, Everton Blender, Anthony B, Junior Kelly, KRS ONE and Sixman.
When he is not performing at special events or promoting his favourite artists, he spends his time in the studio creating his own music. Known for holding a monthly residency with his own recurring event “RepreZENt” at Amsterdam’s reggae hotspot “The Zen Social Club”, Ras Tariq has spent a lot of time to develop his sound. For him, it’s all about conscious lyrics and energetic, positive vibes. Around the world people are starting to recognise Ras Tariq’s mission to spread universal love through music.

Greetings in the name of H.I.M. Haile Selassie I, Jah...

Come vibe with @rastariq and many more this Saturd

Greetings in the name of Rastafari Peace and Love.

BEAUTIFUL PEOPLE give thanks to the Most High alwa

YES give thanks to the Most High always!! Thank yo

Here in Athens getting ready for the @athenscannab

Give thanks for life! Thanks Istanbul.. It's been

Give thanks for the life you live... Paris was gre

Full a style and fashion. Keep it 💯 and give Ja

Big up man like @riomayankaya the positive yute mi

Me doing what I do best.. Man a workman.. Love di